This certainly isn’t breaking news, but amidst all the doomsday reports we hear everyday in the 24/7 news cycle, I felt this was a bright spot. High On Fire/Sleep guitarist Matt Pike tied the knot with partner Alyssa Maucere one day after High On Fire’s performance at Psycho Las Vegas. On Saturday August 17th Pike and Maucere(who is a musician and tattoo artist) exchanged vows at the Silver Wedding Chapel in Mandalay Bay. 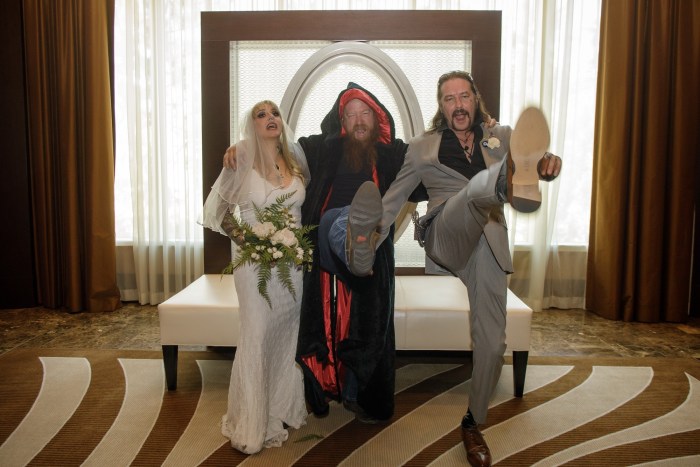 Pike had been in a long term relationship for years but it ended amicably prior to the release of High On Fire’s 2015 album Luminiferous. That led to more of a downer doom record as Pike was in a post-breakup headspace. By contrast, last year’s Electric Messiah turned out to be a future speed metal classic as Matt Pike had found himself with someone that understood the life of a musician. And lets be honest, Pike is a pretty prolific musician. He seems to either be writing and touring with one band or the other. That can take a toll on a relationship, especially if one of those individuals isn’t in the business.

You’re probably wondering, “Why are you posting about this?” Well, like I said earlier I’m tired of all the fire and brimstone that’s seemingly posted nearly every second of the day. I’m perfectly aware we’re crumbling as a functioning society. I know that the dividing line keeps getting wider and wider, and I don’t need reminded of it every time I go to check the weather.

I’m a huge High On Fire and Sleep fan, and I was pretty worried for Matt Pike last year after he had to cancel a tour due to having a toe amputated due to complications from Diabetes. Pike is one of the last true metal heroes. He hasn’t mellowed with age. There is no Black Album or Load in his discography. He’s as heavy and intense musically now as he was as a young Hesher in Oakland blasting his brain with Kush and his ears with a Marshall stack. Pike is only a year and a half older than me, but he looks like he could be my crazy, grizzled uncle that lets me sip his Jameson at family reunions and tells us stories about jamming with Slayer and getting stoned with Electric Wizard. I want Matt Pike to live for a very long time, as I think we need curious dudes like Pike around. Thinking those crazy thoughts and questioning the fabric of reality as we know it. Conspiracies about aliens, grand musical tales of the Weedian people, Jesus’ stillborn twin that becomes a time traveler? Right now, the world needs Matt Pike more than ever.

Congratulations Matt and Alyssa. All the best to you. And as for your wedding gift, I hope you like Tupperware.