Man, do you remember when Oracular Spectacular dropped in 2007? I don’t. I was too busy in my own crowded little universe to notice a couple college kids from 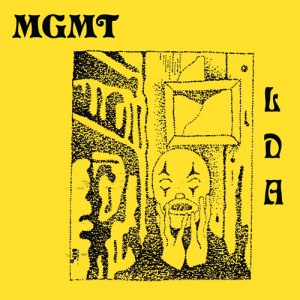 Connecticut leaving one of the most impressive debut records of the naughts at the doorstep of world. But by 2009 I was hip to it. Day-go-colored rags, hippie-meets-alien vibe, and the stucco’d put together sonics were such a refreshing sound from the stuffy and self-serious vibes of all those Conor Obersts, Dirty Projectors, and Grizzly Bears. But in 2010 I was on top of things and when Congratulations hit I was in awe of how these two young dudes took that near perfect formula they’d put together with Dave Fridmann and completely blew it to bits. That album was this erudite, melancholy affair that seemed to be channeling Odessey and Oracle and something not of this earth. I don’t feel weird in saying it’s become a modern classic.

From this point things seemed to stall for Ben Goldwasser and Andrew VanWyngarden. Maybe they bit off more than they could chew? Following up such an ambitious sophomore album proved too daunting? Whatever it was, their 2013 album MGMT felt pretty uninspired. Two guys that hit earth hard like a blazing meteor but had seemed to have used up all the tricks up their day-glo sleeves.

Goldwasser and VanWyngarden have returned from a nearly 5 year hiatus with Little Dark Age. MGMT have seemed to have mined what made them so engaging, catchy, and enjoyable on those first two records and have given us a tight, fun, and extremely re-listenable album.

Since the beginning there’s been a quirkiness to MGMT. No matter how cool or however much these two east coast dudes have seemed to have had their fingers on the pulse of what was cool(or what they knew would be cool in a few months), Ben Goldwasser and Andrew VanWyngarden have always come across as quirky. Messy hair, distant look in their eyes, and probably listening to some weird Euro pop from the 60s that you’ve never heard of in their Wesleyan dorm rooms. I think that’s what gives them the upper hand in the indie music world. They do what feels right and don’t care what anyone(including you and me) thinks. “She Works Out Too Much” opens the album sounding like Mac Demarco on a Buggles kick while attempting to make an album in the vein of ELOs Time. It’s a little goofy, a little catchy, and slightly off kilter. “Little Dark Age” has all the 80s Gothic dance moves of The Human League and Depeche Mode, with just a hint of tongue planted in cheek. You could never accuse MGMT of being too self serious and this great song is proof of that. If Rod Argent had been 20 in the early 80s I think he would’ve been writing songs like “When You Die”. It has just the right amount of whimsy and melancholy. Here is where MGMT shine. These dreamy, eclectic kinds of tracks that you’d definitely include on a mix tape for that girl(or guy) you really want to impress. “Me and Michael” has the big 80s production and vibe to go along with it. As quirky as these guys are they can write a great pop song.

Elswhere, “James” sounds like solo Peter Murphy mixed with a touch of 70s AM gold. “One Thing Left To Try” has the swagger of Dead Or Alive with an “everything but the kitchen sink” vibe. “Hand It Over” is a melancholy ending, sounding like Ween covering Gilbert O’Sullivan with nothing but a Casio synth and a beat up 808.

Little Dark Age is a catchy album that shows MGMT easing into a comfortable place musically. No obvious attempts at trying to recapture past magic, or any grandiose over-reaching. It’s just a really fun record that seems to encapsulate everything that made these day-glo kids so captivating in the first place. These day-glo kids are now middle-aged dudes, and it seems to fit them pretty well.