It’s not often we find our main passion in our 30s, yet that is what happened with Fort Wayne by way of the UK artist Frank Louis Allen. After a back injury left him partially disabled back in 2011, Allen began drawing. He began sharing his work on the Facebook page “Artists and Autism”, an online community that promotes autism acceptance through art. This page allowed Allen to connect with other autistic artists and he began hosting weekly videocasts of his drawing. The page also introduced him to the founder of the community, Kara Stewart Allen. In 2013 Allen moved to Fort Wayne to marry Kara and become a full-time Hoosier.

Allen’s work is in-the-moment, spontaneous, and free form. It’s big and busy, with what feels like worlds being created within the pieces. I look at his work and I’m reminded of graffiti and subway art of the 70s and 80s. Work that was featured in documentaries like Style Wars and Kings of Broadway. There’s a certain confidence that comes through his work that pulls you into Allen’s world. I had the opportunity to sit down with Frank Louis Allen and talk to him about his art and what inspires his creativity.

Frank Louis Allen: I grew up in a county just north of London, England called Bedfordshire.

J. Hubner: What was your childhood like? What sort of kid were you?

Frank Louis Allen:  My childhood was mostly good except for the frustration of having Autism. I would find it very hard to balance my emotional reactions. I was mostly non verbal only talking to my brothers and sisters and absolutely nobody else until about my 3rd year of school.The other kids would always come around me and watch me draw as a kid.

J. Hubner: At what age were you diagnosed with Autism?

Frank Louis Allen: Like millions of people with autism you would not be able to tell we have it just by looking at us. I wasn’t diagnosed until my early thirties when I was tested at one of the worlds top research hospitals for Autism in London. They found that I was measured  in the top 1% of people for Visual Cognition (Visual IQ.) I hadn’t drawn much since I left school as I was overly anxious about needing a reason to draw something which is a shame. Just a few years ago I got over this by discovering that if I thought of myself as listening to music rather then drawing, I could draw without thinking about what I was drawing to good results. I feel my art expresses to me things about my emotions that I may sometimes not be able to put my finger on.

J. Hubner: So you had to take that component of intellectualizing your creative process and make it more of a stream-of-consciousness and visceral experience. Drawing to you is like putting on an album and just getting lost in it?

Frank Louis Allen: Yes totally stream of consciousness. If i try to think about what to draw I’ve got nothing. I think the music distracts my brain enough for me to not think about it. Your subconscious does so many calculations in everyday life. When it comes to art and spacial awareness it has your back. I also have had a genetic eye condition since birth called RP, Retinitis Pigjentosa. I can’t replace eye cells as they die.  This way of drawing gives me hope that I can carry on as my eyesight degenerates. 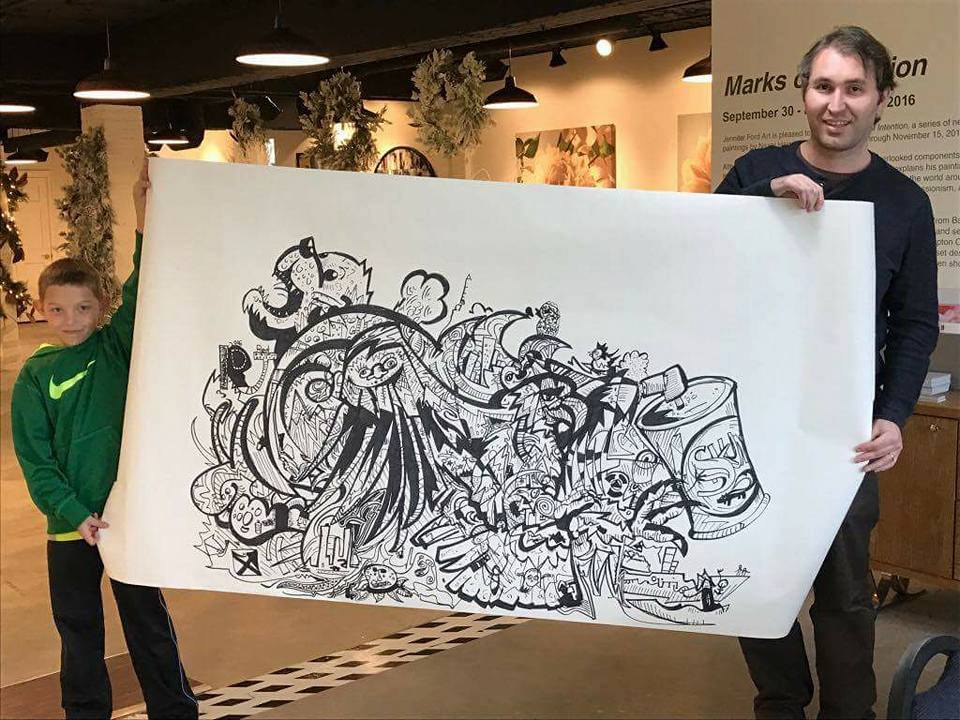 J. Hubner: So let’s talk about your art. You have such a distinct style. It’s big, colorful, and it seems to carry within it it’s own little universe with each piece. It’s like a microcosm of a million thoughts all coming together at once. Can you tell me about your influences that go into informing what comes out on paper? Growing up what were some things that pushed you to want to create?

Frank Louis Allen: As a child at school I remember continually doodling during class. When I left school drawing for the most part stopped. I think my style of line is heavily influenced by comic book illustration, not the usual art you see in galleries. I am most comfortable in black and white and create most of my pieces with broad chisel tip Sharpie markers. I really feel out of my depth when it comes to using color. If I do color one of my pieces it is usually using a program on the computer, as I have found that working with paints completely throws hurdles into my whole process of creating. Although, people are generally very happy with the results of my colored work. Mostly the artwork is not consciously influenced by any artists as I know next to nothing about art. I just draw lines with no image or plan in my head and the drawings I create end up resembling whatever people see in them. I use music to keep this process as free as possible. I’ve never been someone with the ability to see an image in his head.

J. Hubner: Can you tell me how you ended up in Fort Wayne, Indiana from London? What are some of the advantages and disadvantages of living in the Midwest as opposed to the UK?

Frank Louis Allen: I met my wife online through her Facebook page Artists and Autism. It is a group that shares anyone’s work who shares with us and has autism. We currently have over 200,000 followers. We co-hosted an autism art show, and spoke to each other a lot, so I came over to America and stayed. Fort Wayne has offered fantastic art opportunities. It is a thriving place for it, it seems. Although I really miss how easily I can travel around near London. I could jump on a bus or a train and travel anywhere. America is the worst place in the world for this. I also miss being able to walk to get food. You are very limited to big chains in the states unless you are blessed with living close to downtown.

J. Hubner: What was the experience like with the Middle Waves Festival? You were live drawing to the Flaming Lips as they performed their set, is that right? Where were you set up? Did you do that with any of the other performers over that weekend?

Frank Louis Allen: Middle Waves was fantastic. I got a massive buzz from drawing to the bands there. I set myself up in the VIP area there. I was really thankful for the free pass the organizers set me up with. I also wandered around and created drawings to other acts, my favorite of which being Night Is Electric. They were just phenomenal. In fact all the acts I saw were.

J. Hubner: Let’s talk about your recently released coloring book, ‘Coloring With Frank Louis Allen : Vol 1’. How did the idea to release a coloring book come about? Where is it available?

Frank Louis Allen: The coloring book is already available from Amazon all around the world. Just put my name in and up it pops. People have been saying to me for the past few years that they would like to color my drawings so I was pleased to fill that demand. I picked out quite a selection of different pieces and I really look forward to seeing what people do with them and where it takes the pieces.

J. Hubner: Can we also talk about the weekly art show you host(or hosted?) on autismbrainstorm.org? How did this show come about?

Frank Louis Allen: A friend asked me if I was interested in doing this show a few years ago. I got to draw whilst I talked to people from all around the world about autism and art. It was really great creating alongside people in both Germany and Canada at the same time. Someday I hope to pick it back up again.

J. Hubner: Besides your drawings you also create music under the name of R. Dakota. Is your musical process similar to your drawing process? Is is in-the-moment and spontaneous? ‘The I’ve been thinking about you lately session’ sounds very raw. Who are some musical influences?

Frank Louis Allen: Yes I create music in exactly the same fashion, just hit record and start to play and sing. A lot of the stuff seems to come out almost fully formed, but the downside of this process is I’m not very good at taking the music further. It seems to constantly change and shift. I’m working on this. When I do get the opportunity to play live it is always a very heartfelt experience and people really appreciate it even though the edges are a bit rough sometimes. I would say the biggest influences of the R.Dakota sessions are Frank Black and the Pixies, Bright Eyes and Nick Cave and the Bad seeds. Music and food are probably the two things that excite me the most in the whole world. 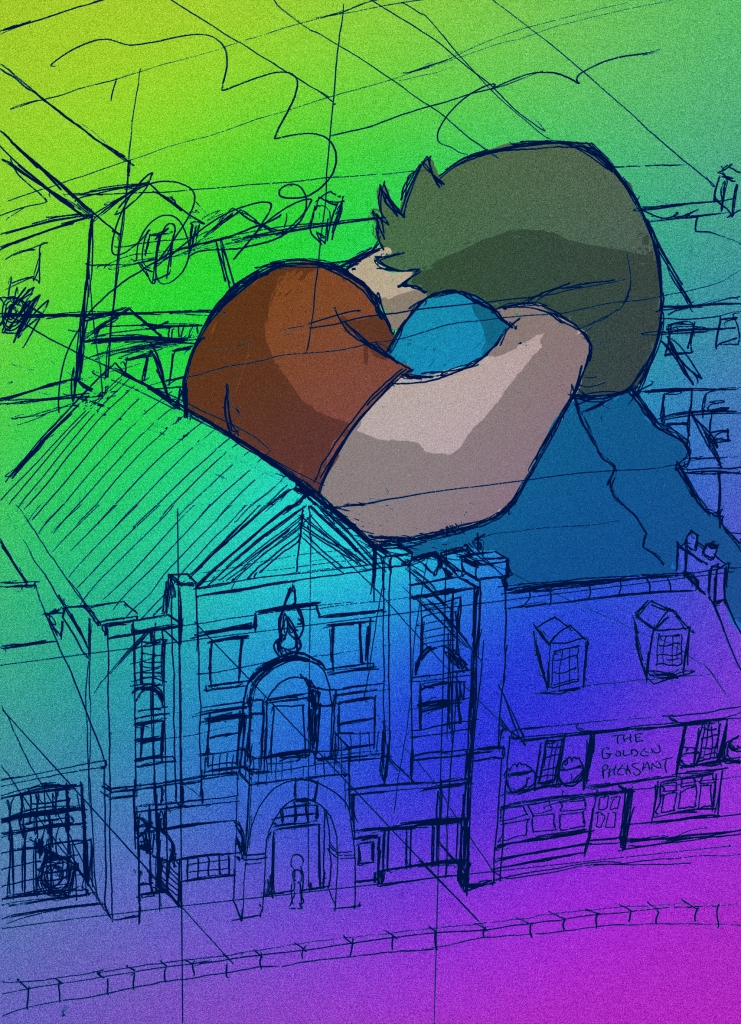 J. Hubner: Are you exhibiting any pieces here in Fort Wayne? Are you showing in any galleries? Where do you direct folks that want to see your work?

Frank Louis Allen: There is a large permanent gallery of my work downstairs in the Academic Center of Indiana Tech University. I was very flattered to get such a gallery with so much of my work in such a cool building It is the best and easiest place to visit to see my work on display.

J. Hubner: What do you have planned for the immediate future? Will there be a volume 2 for the coloring book? Any performance art pieces in the works?

Frank Louis Allen: I’m hoping to do some new exhibitions around Fort Wayne and I am currently getting the right pieces together to accomplish this. I’m also hoping to set up some local signings for my coloring books. I’m looking to release Volume Two in March of 2017. Meanwhile, Volume One is easy to find on Amazon.

Keep up with Frank Louis Allen and his amazing art over at his Facebook page. You can also find out more about Frank here. Pick up his coloring book over at Amazon. And remember, the doodle shall prevail.

9 thoughts on ““The Doodle shall Prevail” : The Art of Frank Louis Allen”