If you think about it State of Euphoria by Anthrax really didn’t have a chance. It’s the bland meat in-between the out of this world speed metal artisan bun known as 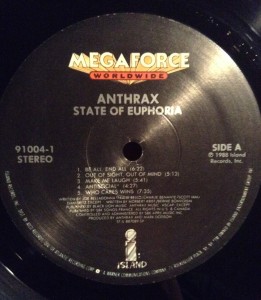 Among The Living and Persistence Of Time. Among The Living is the premier thrash album from 1987. It was the proto-speed/thrash metal album, and one of four albums that defined and shaped a whole new genre which also included Metallica’s Master Of Puppets, Slayer’s Reign In Blood, and Megadeth’s Peace Sells…But Who’s Buying. Between 1986 and 1987 these four records dropped from darkened skies and were baptised in the blood that flowed freely from thousands of mosh pits and skate parks across these great lands. Jump to 1990 and Anthrax release, in my eyes at least, one of the best speed/progressive metal albums to date in Persistence Of Time. That record was this perfect storm of speed metal perfection, thrash and punk angst, and progressive metal intricacy. Besides having some of my absolute favorite Anthrax songs, it also has on it a dead-on cover of Joe Jackson’s “Got The Time”. And really, is there anything better than Charlie Benante double kick opening on “Time”? Or the sheer heaviness of “Belly Of The Beast”?(I nearly blew the speakers in my 1977 Chevy Nova cranking that song.)

So that leaves the pretty much forgotten State Of Euphoria from 1988. It came out just a year after Among The Living and I think a lot of people were still getting their head around that masterpiece when Euphoria hit record stores. And unlike Living that possessed several earworm nuggets of thrash goodness(“Caught In A Mosh”, “I Am The Law”, “Efilnikufecin(N.F.L.)”, and “Indians” just to name a few), State Of Euphoria seemed to be lacking in that one instant classic track. They ran “Make Me Laugh” right out of the gate and made that the first single, which in my opinion they should’ve gone with “Antisocial” as their first single as over time this has become one of their live staples. There just didn’t seem to be a lot of love for this album in 1988.

For me, State Of Euphoria was the first Anthrax album I bought(on cassette, natch.) My brother and I headed up to the Concord Mall about 35 miles north of where we lived and I snagged it the day it came out at Super Sounds. We popped it in his Mazda truck’s cassette deck and proceeded to headbang our way back home. Despite the popular view of this album, I think it’s sort of a classic. When you sit down and soak in this record you start to hear just how dark the album really is. From “Be All, End All” and its haunting cello opening to the that chunky, chugging goodness of “Out Of Sight, Out Of Mind”(Scott Ian and Dan Spitz’ guitar tone was the tone to beat, thanks to the combo of their Jackson guitars and Mesa Boogie amps.) While “Make Me Laugh” has grown on me over the years with its doom and gloom opening that snaps into a classic Charlie Benante drum explosion, I still think “Antisocial” should’ve been the first single and video. “Antisocial” has the markings of a speed/thrash metal classic. Gang-like shouts in the chorus of “YOU’RE ANTI…YOU’RE ANTISOCIAL!!!” makes tinglies form in the extremities of guys of a certain age(if you were in middle school in 1988 and ever banged your head alone in your bedroom you understand.)”Who Cares Wins” is another dark grower.

As with most of the Anthrax discography, many of the songs were inspired by films, books, and comic books. With State Of Euphoria, “Misery Loves Company” was based on Stephen King’s Misery, while “Now It’s Dark” was inspired by David Lynch’s seminal Blue Velvet, with the line “Don’t you fucking look at me” in the chorus taken directly from the mouth of Dennis Hopper’s character Frank Booth. “Make Me Laugh” was a big old middle finger to televangelism and the premier televangelist clowns of the day, Jim and Tammy Bakker. Scott Ian wrote some of the more interesting lyrics of the time, and the fact that he based a lot of his lyrics on things that gawky teens like myself loved(horror, film, comics) made them that more vital. It made us teen metal heads feel like we had a connection to the band. You didn’t quite get the same connection with bands like Slayer and Megadeth. There was an emptiness and darkness in their albums that kept reasonably well balanced youth like myself a good arm’s length away. I loved their records, but at a distance. Judge Dredd, David Lynch, pointing out the hypocricy of religion, and Stephen King? I was good with that shit 24/7.

A few months ago I found myself pining for those thrash metal records of my youth. I began searching for those albums in the interweb and so far I’ve got two: Among The Living and State Of Euphoria. It’s a good start I think. Being able to throw State Of Euphoria on the turntable is great. I’ve spun it quite a few times over the last couple weeks and I have a whole new appreciation for the record. I think it could’ve been even better had they maybe given themselves a little more time to hone some of the tracks, but who am I to tell Anthrax what they should’ve done? I’m just some Midwestern schlub. Besides, had they waited to put it out that might’ve thrown the whole speed metal timeline off and Persistence Of Time could’ve turned out completely different, or maybe it wouldn’t have happened at all. Where would the world be then? Or the universe? Giant arachnids might be running the show. Jim Bakker could’ve become President. There could’ve been a shift in the space/time continuum and we might’ve been turned into space dust in 1990, after the cancellation of Battle Of The Network Stars.

Fortunately things happened the way they did. State Of Euphoria is not the bland meat between an Among The Living/Persistence Of Time sandwich. It’s actually quite an underrated record that deserves to be revisited.

13 thoughts on “Antisocial…and loving it!”